Interesting Information About the Evolution of Moccasins

Uncategorized
Interesting Information About the Evolution of Moccasins 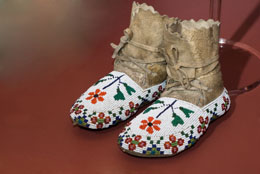 Moccasins, the word itself conjures up images of Native Americans; perhaps as we imagine them from Hollywood westerns. It has been said that there are only seven basic kinds of shoes. Although sandals have perhaps been more widely worn, as the website Shoe Design states, many believe that the moccasin is the oldest type of footwear known to man. Although similar styles have been worn by people in other lands, it is still appropriate to think of Native Americans in any discussion about these shoes. According to Native Tech, the word comes from the Narragansett (Algonquin) people of southern New England. Their word for shoe, ‘Mocussinass’ or ‘Mockussinchass,’ has been adopted into English as moccasin, and generally refers to the footwear worn by many of them.

Even if you were bored by the previous paragraph; even if you care nothing about the culture, you owe it to yourself to at least try a pair of moccasins. After all, with only seven types of shoes to choose from, you’ll be limiting your selection if you don’t. Besides, if you’ve never worn a pair, you don’t know what you’re missing. Imagine your most comfortable pair of bedroom slippers. Now, think of moccasins as outdoor slippers. In fact, the shoes can be defined as one of the softest leather slippers.

Of course, you could go out and buy a pair of moccasins. By far the largest manufacturer is probably Minnetonka Moccasins. These can be found in a multitude of stores, both online and brick and mortar stores, including the Minnetonka Moccasin (physical shop or online store), or even through Amazon. If you would prefer to buy a traditional pair, the website Native Languages provides some links to stores that carry these.

Can You Make a Pair?

However, unlike other styles of footwear, such as oxfords or cowboy boots, these shoes are simple enough to make that you could make them yourself. According to the Lewis and Clark Journey of Discovery, while the members of that expedition at first laughed at the Native American dress, eventually they adopted it, learning to make them and other pieces of clothing for themselves. Since a pair would wear out in a couple of days, they got plenty of practice making new ones. What they made back then while living off the land, you can make today sitting at home.

Different tribes wore different styles of these shoes, making footwear that was best suited to their circumstances. Soft-soled moccasins were more common in the Eastern forests, with hard soles more commonly found among the tribes inhabiting the plains and deserts of the west. Traditionally moose, elk, or deer hides were used. These are still recommended, because they are softer and stretch more than leather made from a cow or pig. You might also try garment leather or some other type of thin suede. Different styles and sizes use different amounts of leather. Some shoes are made from a single piece of leather and some use more than one. You’ll need some form of pattern to determine how much leather you’ll need.

So then, whether you are a hobbyist looking for a challenging new craft or just a collector of shoes, the next time you’re looking for something to put on your feet, why not try a pair of the oldest and most comfortable form of footwear around.